Why holding equities is still a good idea 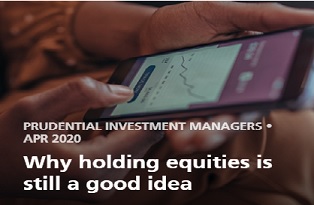 Why holding equities is still a good idea

Watching the value of your investment tumble over the course of just few days can be a painful experience. The global market crash that we’re experiencing has been unlike anything most seasoned investors have seen before, in its speed and severity. So if you’re new to investing, you certainly wouldn’t have seen an equity sell-off quite like what we’ve witnessed over the past month, and you would be forgiven for wondering if equities was still the right asset class for you.

At this juncture, it’s worth pointing out that your decision to invest in equities should have less to do with short-term performance and more to do with your investment objective, tolerance for risk, and investment time horizon. Unless these factors change, neither should your investment portfolio.

But if you’re still considering switching into an asset class that promises a less painful experience, then it’s important to be aware of two factors:

1) the sell-off due to the COVID-19 pandemic is an anomaly and not considered as typical market volatility; and

2) a sell-off of this nature is typically followed by a period of significantly strong equity performance for investors. To demonstrate these points, we take a closer look at the past two stock market crashes and the impact that they’ve had on local equities.

In the early 2000s IT companies in the US sold off sharply, dragging global equity markets lower. Local equities followed suit, with the FTSE/JSE ALSI experiencing a sustained period of underperformance for nearly 12 months.

As shown in the graph below, during this time the index lost roughly 33% in value before reaching the bottom in April 2003. What came thereafter was a prolonged period of exceptional equity performance for investors, lasting approximately five years. During this time the ALSI increased by roughly 350% in value from trough to peak.

In 2008 the world experienced what many believed at the time to be the collapse of the global financial system. In spite of South Africa’s financial system being relatively well regulated and maintained, the local market was not spared from the risk-off sentiment which resulted in the ALSI losing roughly 46% in just over six months. What followed was a sustained period of strong equity growth, with the ALSI rallying 246% from trough to peak over the next 10 years.

What the above examples demonstrate is, firstly, the infrequency at which markets crash (having occurred just twice in the past 18 years); and secondly the extent to which equities rally in the period following a crash.

These recovery periods are often ideal opportunities for investors to make good returns. While it might sound counter intuitive, buying more equities while markets are falling is far more likely to make you money than if you tried to time the market (which most experts tend to get wrong) or if you sold out of the asset class completely. The theory behind this is simple: when markets recover it’s typically best to have as much exposure to equities as possible; and by purchasing more assets as prices are falling you are able to get more shares for your money while also spreading the risk of poor timing. You are getting a nice discount on the asset price.

Of course you need to choose which assets to buy very carefully, as given a crisis like the present pandemic you need to know how the severely the economy will be affected. Which companies will survive the shutdown and thrive in the subsequent recovery? That will take time to determine, since it is still unfolding.

Although no one can predict when markets will recover, history tells us that at some point they will. And when they do, the question that you want to be asking yourself is not whether it was a good idea to sell the asset class while markets were falling, but rather if you should have taken better advantage of the low prices and purchased more.