Why cash can be the riskiest asset of all

Why cash can be the riskiest asset of all

Every investor would have heard of equity and listed property referred to as ‘risk assets’. They would also have seen a graph which shows the relative risk of different asset classes, with cash at the bottom as the ‘lowest risk’ and equity at the top as ‘highest risk’. Intuitively, this also makes sense. Cash in a bank is pretty safe, and to a certain extent is even guaranteed by the central bank. Unless there is a serious meltdown, you’re unlikely to lose it. Shares, on the other hand, are a lot less secure. Anyone who was invested in the stock market at the time of the 2008 crash can attest to that. The FTSE/JSE All Share Index fell over 40% from its high in May that year to its lowest point in November.

However, there is a major caveat to this that easily gets overlooked, and often to an investor’s detriment. When people talk about risk in this context, they are talking about volatility in asset prices and the potential for a short-term loss of capital. That’s certainly appropriate if you are putting money aside that you might need in the next year or two, but it’s far less so when you’re investing over the longer term. When your investment horizon extends over ten or 20 years or longer, there’s a far more serious risk to your wealth than the day-to-day ups and downs of asset prices. “The main investor risk lies in inflation,” says Graham Tucker, manager of the Old Mutual Balanced Fund. “Inflation quietly consumes the spending power of your hard-earned savings and you don’t notice it that easily until it’s too late.” He points out that many people don’t realise just how much inflation eats away at their wealth. The graph below illustrates how the value of R10 000 decreases over a 30-year time period at different inflation rates. 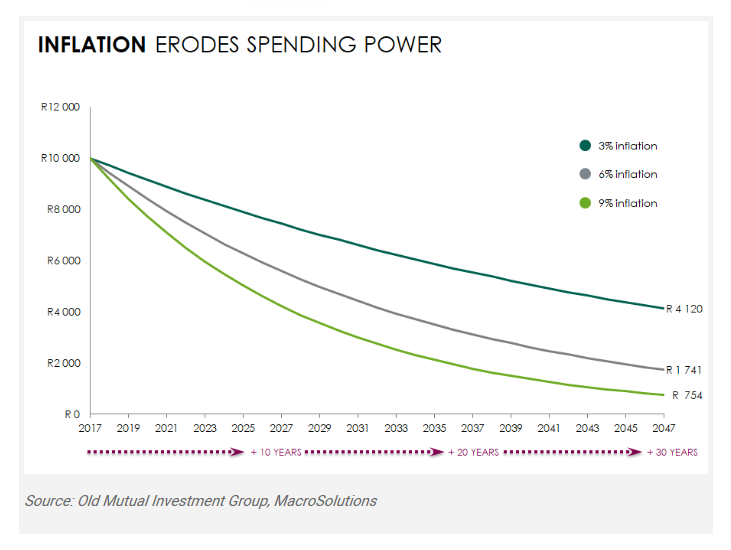 What this shows is that even at an inflation rate of just 3%, the value of R10 000 would diminish to the equivalent of R4 000 in 30 years. At the upper end of the South African Reserve Bank’s target range, that R10 000 reduces in value to the equivalent of just R1 700 in today’s money over the same period. “If you experience a higher rate of inflation due to rising education or medical costs, it has an even larger impact,” Tucker points out. “At 9% inflation, your R10 000 today is worth only R750 in 30-years’ time. It’s fair to say that inflation is a long term investor’s true nemesis, and it’s a relatively silent one at that.” Given this reality, the perceived safety of cash takes on a very different complexion. This is because while your money in the bank might never decrease, it is not going to increase much in real terms either. “We’ve analysed the long-term experience of various asset classes and arrived at a few indisputable conclusions,” Tucker says. “The return from cash in South Africa over the last 88 years has been 6.9%, compared to inflation of 6.2%. That is before tax. Therefore cash in the long term is not the answer.” To combat inflation, what investors need is exposure to higher growth assets such as equities and listed property. As the graph below shows, over the same 88-year period local equities have produced real returns of 7.8% per year on average. 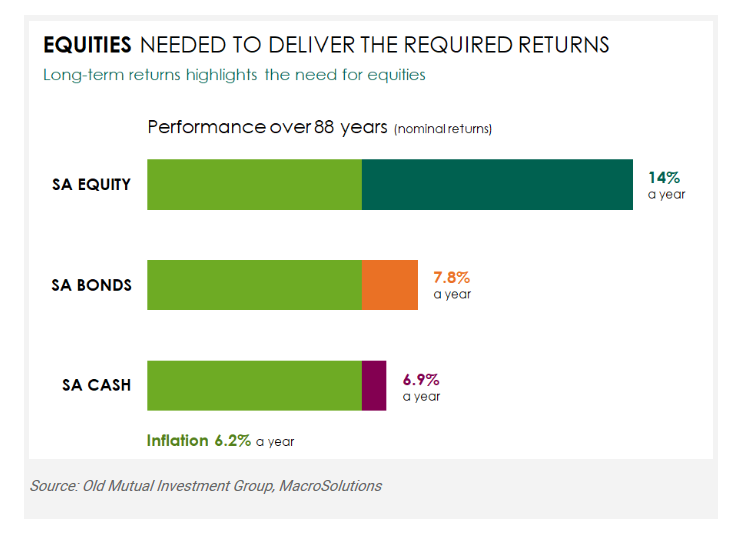 “One of the problems with these growth assets is that they are often termed risk assets because they display volatility,” Tucker notes. “But volatility is not the risk that long-term savers face. It is inflation. Volatility may be uncomfortable and from time to time as equities do fall in value, and if you have a short-term time horizon that can be problematic. But even in retirement most investors still have a multi-decade time horizon and need exposure to assets that will grow ahead of inflation.” What makes this argument even more compelling is that the longer you stay invested, the less volatility plays a role. In fact, over the last 58 years, holding equities for more than five years in South Africa has never been a risky strategy. 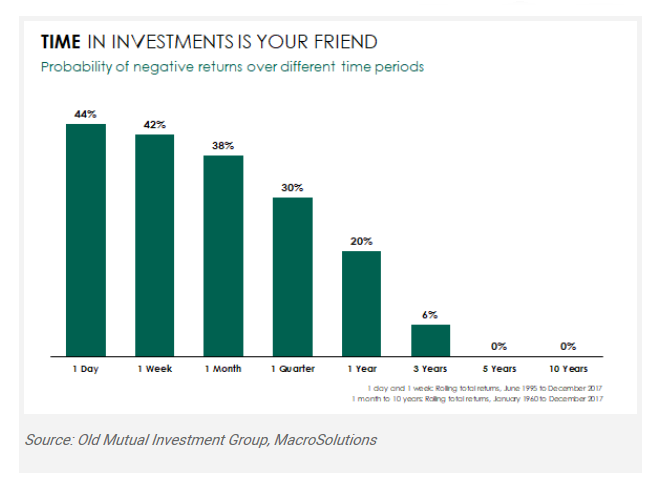 “What history shows us is that in the very short term of a day or a week, the chance that you could have lost money by holding local equities has been extremely high,” explains Tucker. “But as we extend our buy and hold period to years, that chance of losing money decreases rapidly.” Time, in other words, has the effect of smoothing returns. “The direction the market takes in the short term is almost equivalent to a coin toss,” Tucker says. “The factors driving markets in the short term are noise and sentiment. However, over the long term fundamentals and starting valuations play a for more important role.”