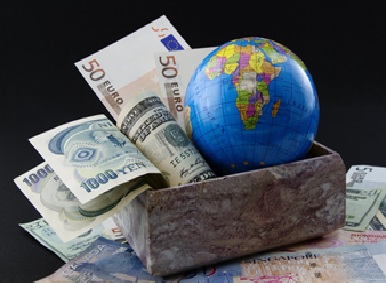 Global equity markets were broadly positive in August, largely on the back of advancements in the development of a Covid-19 vaccine, the broad-based resumption of global economic activity and growth, and the announcement of a new approach to average-inflation targeting by the US Federal Reserve. In South Africa, the easing of lockdown restrictions and the further opening of the economy helped lift investor sentiment somewhat, however this was largely offset by sharp declines in the Property and Financial sectors.

Looking at global equity market returns (all in US$), the MSCI All Country World Index returned 6.2% for the month. Developed markets outperformed emerging markets, with the MSCI World Index returning 6.7% and the MSCI Emerging Markets Index delivering 2.2%.

The spot price of Brent crude oil closed August 4.6% higher from the previous month at around US$45 per barrel. Precious metals prices continued their rising trend, with platinum up 2.4%, palladium rising 5.2%, while industrial metals also rose: copper was up 4.4% and aluminium gained 4.5%. Gold was the only outlier closing the month -0.9% lower.

In the US, advance estimates confirmed that the economy had entered a recession after declining 31.7% in Q2, marginally above market forecasts of a 32.5% decline and still the biggest contraction on record. The Federal Reserve (the Fed) announced a new approach of average-inflation targeting, which will allow inflation to run moderately above or below the Fed’s 2% target. As a result, interest rates could be left lower for a longer period despite an increase in inflation. Consumer price inflation continued its recovery from its four-and-a-half-year low in May, after increasing 1% in July.  Meanwhile, the unemployment rate dropped to 10.2% in July from 11.1% in June, as more businesses continue to reopen in the wake of easing lockdown restrictions. Investor sentiment was also buoyed following the announcement that the Phase 1 trade agreement with China would go ahead as planned, after the Trump administration continued asserting restrictions on Chinese Telecoms giant Huawei, which would make it harder for the company to get semiconductor chips from the US.

In the UK, preliminary estimates showed that the economy shrank by 20.4% in Q2, the largest contraction on record. This marked the second consecutive quarterly contraction in GDP, as the UK officially entered a recession. The Bank of England (BoE), meanwhile, maintained its key bank rate at a record low of 0.1% and kept its bond-buying programme at GBP745bn as expected. The BoE warned that Britain’s economy may take longer to recover than initially expected, and that inflation would likely fall further below the 2% target. Annual inflation increased to 1% in July from 0.6% in June.

Meanwhile, the Euro Area economy entered a recession after advanced estimates showed GDP contracting 11.8% in Q2, but still the largest contraction on record. This was largely on the back of Germany, France, Italy and Spain posting record declines in GDP for the quarter. The European Central Bank maintained its EUR1.35trn Pandemic Emergency Purchase Programme (PEPP) but adjusted the net purchase envelope to be considered as a ceiling rather than a target. Annual inflation for the Euro Area edged up to 0.4% in July, in line with preliminary estimates and marking its highest reading in four months.

The People’s Bank of China (PBoC) kept its benchmark interest rates unchanged for the fourth consecutive month, amid signs of an economic recovery. Positive economic data helped boost investor sentiment, with Manufacturing PMI increasing 52.8 in July, up from 51.2 in June. This was the third consecutive expansion in factory activity and the sharpest in nearly a decade. Annual inflation, meanwhile, recovered further from its 14-month low in May, rising 2.7% in July. In other news, US and Chinese officials reaffirmed their commitment to the Phase 1 trade deal, which seemed in doubt after the US asserted additional restrictions on Chinese Telecoms company Huawei.

The Hong Kong market was weighed down by a crackdown on prominent pro-democracy leaders as the government demonstrated its intent to wield the full power allowed it by Beijing’s wide-ranging new security law.

In Japan, preliminary estimates showed that the Japanese economy shrank 7.8% in Q2, marking the third consecutive quarter of contraction and the steepest on record. Japan’s consumer price inflation recovered from a three-year low to 0.3% in July.

In South Africa, investors welcomed the further opening of the economy as the country moved to Level 2 of the national lockdown, which saw the lifting of certain restrictions including the partial ban on alcohol and tobacco sales. Latest data showed positive signs of economic activity as annual inflation increased 3.2% in July (from 2.2% in June), back to within the SARB’s target range of 3-6%, while retail sales expand 6.4% in June. In less positive news, Eskom reintroduced nation-wide load shedding, while mining production contracted for the fourth consecutive month, decreasing 1.4% in June.

The FTSE/JSE ALSI returned -0.3% in August. Listed Property (SAPY index) was by far the weakest performer with -8.6%, while Financials followed suit with a -4.2% return. Industrials returned 0.5% and Resources 0.7% – with mining stocks suffering as gold prices fell on the back of reduced demand for safe haven assets.

Finally, the rand appreciated against a broadly weaker US dollar, gaining 0.5% during the month. However, it lost 1.5% against the pound sterling and 0.7% versus the euro.